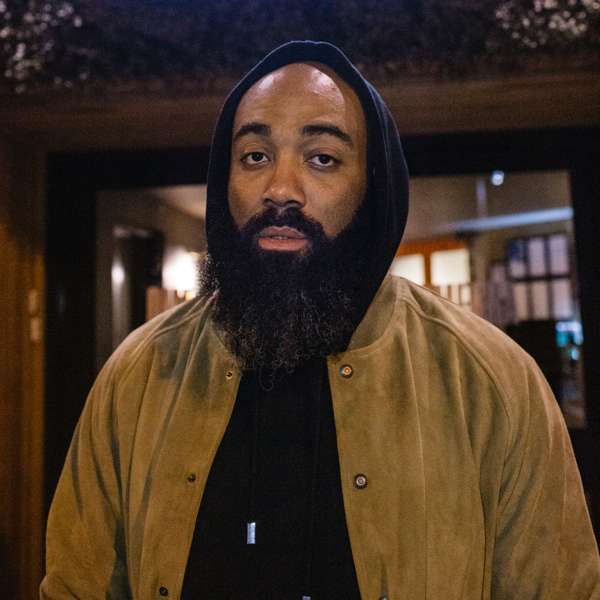 Leytonstone-born Murkage Dave has found himself at a unique crossroads between musical styles and practices. Obsessed with music, he moved to Manchester under the guise of university, but quickly dropped out and started pursuing whatever he could to anchor his life around his passion, cutting cult garage records and promoting legendary parties.

His debut album ‘Murkage Dave Changed My Life’ sees him returning home to East London, witnessing the changing landscape and gentrification, and inspiring him to write a set of twelve “folk songs for the culture”. These include existing singles ‘Put You On My Shoulders’, ‘You Always Ring Me When I’m Busy’ and ‘Magic Mission Deja Rinse’, as well as instant fan favourites ‘Keep Up The Bad Work’ and ‘Niggas Need Each Other’.

Written and recorded this year between London, Paris and Berlin, Dave spent the Summer with the sole aim of crafting a timeless LP, holing up in the studio with executive producer Cores and a cast of talented friends including Manga Saint Hilare, Star Slinger, Massappeals, Louis Don Dada, Sam Wise and Scally, all of whom contributed to the impressive collection.

As a singer and songwriter, Dave has crafted a versatile sound, rooted in a youth spent listening to garage and R&B, but also revealing formative years absorbing The Smiths and Joy Division. It’s no surprise that his defiantly British sound is still attracting fans globally, and he’s collaborated with Mike Skinner, Jaykae, Skepta and French producer Hologram Lo, as well as reaching the ears of Pharrell Williams, Young Fathers, Iggy Pop and Beastie Boys member Mike D, all of which have supported the track on their radio shows.

Having cut his teeth as a club promoter, Murkage Dave is no stranger to the importance of live music and its connection to fans in real life environments. Having partnered with Mike Skinner for the iconic TONGA party series, he joined The Streets on tour earlier this year, as well as supporting JayKae on his 2017 tour. Prior to the release of his album Murkage Dave sold out his first headline show at Sebright Arms in less than 24 hours.

‘Murkage Dave Changed My Life’ follows a two year run sparked by ‘Car Bomb’, which stood out from his ‘D.A.V.E Pt.1’ EP and took on a life of its own. Dave spent the time creating whenever he could, collaborating with singer Scally on side-project HALFBROTHER and releasing tracks with the likes of Jaykae - for the Skepta-produced ‘Every Country’ which has racked up over 2 million streams - and French superstar Nekfeu - earning a triple-platinum plaque for his contribution to ‘Cyborg’.

Since then Murkage Dave’s music has been supported at radio by the likes of Annie Mac, Toddla T, Jamz Supernova, DJ Target and MistaJam, as well as press coverage from Evening Standard, Guardian, High Snobiety, Noisey, Mixmag, London In Stereo, Nation Of Billions, Trench Mag and more.